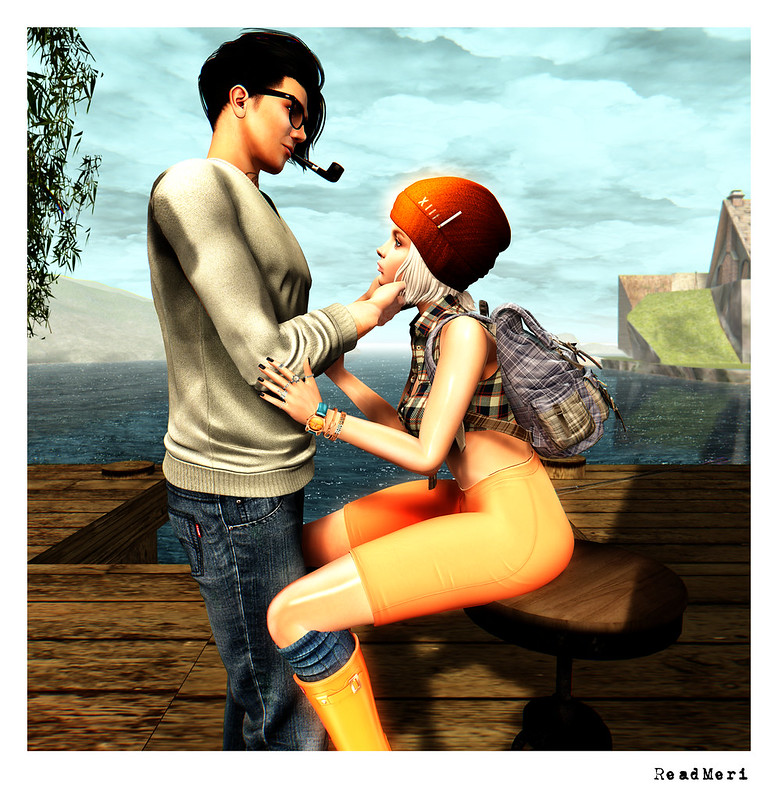 When Thom and I met in SL, more than 11 years ago, I thought he was cool – and he is (sometimes). He thought I was intrusive and fun, which I am (again, sometimes). We began a journey together through SL and then also through RL. We’re quite different characters, yet somehow we meet in the middle with our extremes being tempered slightly by the other being so different.

I suppose, although from the outside we’re very different, we’re at our core very similar. We share a ridiculous and visual sense of humour and can share the same hilarious image until we’re almost crying with laughter.

He’s a total prodder, he likes to tease and go on (he must be 5 inside too sometimes, see yesterday’s blog). I don’t like that but I am used to it, having had older brothers.

I think, although I’m just assuming, that he likes my spirit. I’m a girl who once literally fought him in McDonalds when he tried to take my Big Mac away from me. I doused him in his own coke and ice and then we fought with a mop and a broom. The staff didn’t know where to look.

We like to help each other too. He helps me with jobs around the house – repairing things for me mainly. I like to cook him nice meals and make sure he has a cup of tea when he wants one. I’m also flippin’ BRIMFUL of useful suggestions and ideas – some of which I’m sure he wishes I’d keep to myself.

I suggested last night he might like to give up sugar in his tea, for instance. I pointed out it was bad for him and that it was a lot of sugar over the course of a day and that he used to use sweeteners etc. etc. etc. He just said no, he didn’t want to. And that’s okay too.

He either will cut down his sugar or he won’t and no amount of nagging on my part is going to make it happen. I’m far from perfect and he doesn’t go on about my failings, so it seems only right to return the favour.

We don’t always get on, sometimes we fall out. This usually takes the form of a short break in communication 😀 Not speaking to someone isn’t my usual style, I’m more of a ‘have a row and get it over with’ kind of person, but he prefers to ‘not say things we’ll regret’ and so we do it that way (mainly ‘cus I have little choice in the matter, but hey, nobody’s perfect).

But 99% of the time, I feel loved and I am loved and I’m so grateful for that. He’s a good man and I’m a happy woman.

I could write about him all day but he’d be so embarrassed when he found out and you (reader) would get bored. I just want to finish by saying that I hope you have someone who loves you in your life and if you don’t right now, don’t despair. There’s someone out there for you who will make you feel like you have a best friend, a co-conspirator, an army at your elbow and big strong wall behind you. I know it.

Ooh we love free gifts and these cute ‘Casual Shorts’ from Cynful are adorable. You just join the group and wear the group tag to get the gift in-store. The Cynful Update Group is free to join. secondlife:///app/group/9631cac4-b281-b0c3-3317-24502ce81d3d/about

GingerFish Poses have released this cute couples pose set for Flourish, you can go pick it up and be cute with the one you love.

Lock&Tuft’s Brody hair (unisex) is already causing a stir with the very nerdy cool cuteness of it. It comes with a colour HUD for the hat. You should pop along to Equal 10 and give it a try, you won’t regret it.