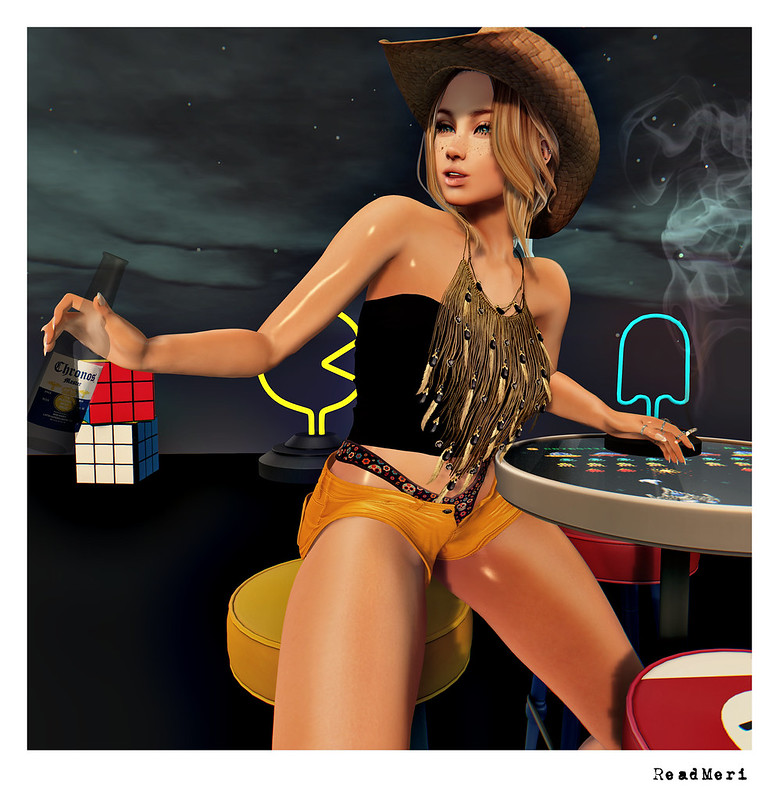 See this picture? This is where I’d like to be. An 80s rooftop bar where I can enjoy the bright colours, music, ambiance, drink beer and have a smoke. I mean, I’m not there… but I can dream, right?

For some months now, I’ve had a plan to get a cat flap fitted for my princess kitten. She’s not a kitten any more but she’s still a princess. She’s 13 months old and bossy. She goes outside but I’ve not wanted her to go far and not at night, so she is allowed out until teatime and then she has to come in for her dinner and she’s not allowed out again.

So far it has worked out pretty well, cus in addition to being a princess she’s also very nosey about what I’m up to, so she likes to pop back every 6 or 7 minutes to keep an eye on me.

I wanted a catflap that would work on her microchip, so no other cats could follow her inside and one that had a timer on it so I could set it to work for her during daylight hours and automatically shut off when it got dark. I found one, it was expensive, I bought it anyway and – this is where it gets a bit complex – I didn’t want the catflap installing in my back door.

My back door is in the dining room. I know, strange right. When I first saw this house I said to my Mum and the agent, ‘Yeah, I like it, but that back door is horrible. I’d replace it with a stable door’. They both agreed that would be lovely.

It took me a loooooooooooong time to find a company who could provide and install a suitable stable door. It couldn’t be ugly or UPVC. It had to be composite so it looked like wood but had good insulation and security, it had to be glazed on the top half in a country-like style and I wanted to choose from a range of country-style colours (nothing worse than fake wood colour to me). I know… but eventually I found it, for a price.

The door and the repair of the arched brickwork over the top cost me almost £2500. I swear, it’s worth every penny, it makes the room. It makes the house!

You can imagine my face at the very thought of cutting into it with a blade and putting an ugly cat flap in the bottom half!

So I decided to put it in the wall in my utility room, which meant getting a man in to make the hole in the wall and install it. Building companies were simply not interested in quoting on such a small job. Thom had indicated he’d rather eat his own feet than do the job for me, so eventually, I found a local handyman who is nice and assured me he could do it.

He came yesterday, he spent a few hours creating an ENORMOUS amount of plaster dust mess in my house and then stood up too fast while outside and cracked his head open on my open window. He walked through to my living room like a little boy and said ‘How are you with blood?’

So that ended up with me bathing his head, inspecting it, making him some sweet tea for the shock, taking some photographs of it (to show him, I’m not THAT gory) and it wasn’t so bad. We agreed he should get it checked out though and he finished up as quickly as possible and left to go to the local Community Hospital.

I set about cleaning, and boy what a job that was. When I’d eventually made a real dent in it and was no longer treading it through the house and the cat had calmed down (princess kittens get really stressy about people in the house making noise) she went to have a look at the new cat flap and so did I. I put the batteries in (thinking, that’s strange, I would have thought he’d have done that to test it).

Reader, it didn’t bloody work did it. The door stuck halfway open in the tunnel and it’s not just a case of chipping a bit more wall off to accommodate it because the tunnel is lined with microchip sensing plastic framing (which was not cheap).

I had to make sure it was closed and locked in both directions so no little cats could garrote themselves with it and then message him asking how his head was and saying he’d need to come back ‘cus it didn’t work.

The net result, he’s coming back tonight.  His head was glued back together.

BackBone Retro Maniacs set is an amazing group gift from BackBone to you! This is the link to join their group inworld https://app/group/884f1fc1-3a3a-d1b0-db50-e668dcfef93e/about

It costs 500L$ to join the BackBone group which might seem steep initially, but the gifts are monthly and really good, you get 25% discount on any in-store purchases while wearing your group tag and they do random giveaways too.

Bueno’s Victory Fatpack is a new release for Uber. The fatpack contains a HUD with 24 shorts colours and 30 designs of panties including plain, lace, patterns. Really, these shorts are incredible value for money. You can’t eat them though. They come in Lara, Legacy, Belleza and Slink <3.

Blueberry’s Elias Tube Top is the part of the set from a day or so ago that I didn’t get to show you at the time. You can view it on my Jungle Book blog