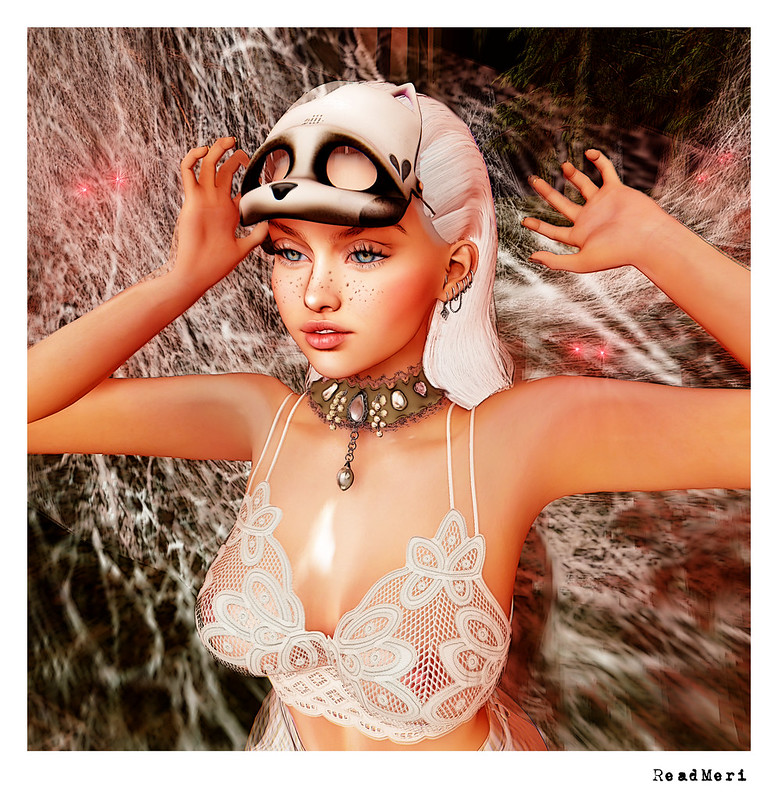 I decided to go a wee bit more cartoon this time with my horror. You might not have noticed but I’m really trying to go along with all the Halloween this month. My photos have had a slightly more horror theme. Today is no different as I imagine man-made horrible spiders with metal clinky feet and red lit eyes spinning a web faster than I can escape it. (Meri thinks ‘oh my hair’).

It also reminded me (with it being both slightly horror and slightly cartoon-ish) that a long time ago my Dad used to call me ‘Horror Comic’.

You won’t hear me talk about my Dad often on the blog because we don’t currently have a relationship, it’s been rocky for some time and the last few years, neither of us has got in touch with the other at all.

But yes, calling his wee girl ‘horror comic’ seems both strange and kinda sweet. I’d forgotten ’til I was looking for a title for this picture.

It’s true that my sense of humour has been a little odd and quirky all my life. I’ve always loved to make people laugh but preferably in that way that also makes them gasp because I’ve taken it slightly over the line.

For example, my Mum said something the other week about having a bigger middle than she used to have, she said ‘I don’t know if it’s just getting older or if I just got fat’ and laughed in that way we do when we know someone will reply ‘everybody spreads a little as they get older, it’s normal’. So I replied ‘Yes, you got fat’ in a very matter of fact type of way. She laughed and looked shocked and kinda hit me a bit. That’s my kind of humour – horrible little horror comic.

Another time, my Dad had built a biggish extension to his house which he told the council was for a dining room when it was actually an office for his business and he had mentioned he should probably pay for business rates or business refuse collection, or both. And yes, he should but it was none of my business.

Except, I knew a girl in that department and I asked her for some of their headed paper and wrote him a very serious letter saying the council intended to collect several years worth of business refuse collection fees from him (coming to quite a fee!) and would be passing the information onto the business rates people. I ended the letter by calling him a massive poopy head and saying he should take the letter, shred it, fashion it into a tool and shove it up his behind. Of course, he didn’t read to the end, or he’d have known straight away it was me and might have noticed it was signed by Mickey Mouse.

It was fabulous fun! (He did realise after a little while when the number he rang from the letter was mine).

I don’t tend to do practical jokes any more, mainly because nothing funny has occurred to me in that line for some time. However… it could happen, so watch out!

If you recall my blog of the 8th October, you’ll remember I said there was a lace top to go underneath the outfit which was a free gift from Addams for their group members (available in-store with group tag on). So here it is! Cute huh?

Lock&Tuft have released a new Halloween-ish hair and mask called Jill. Jill comes with a colour change HUD with allllllllllll the colours and a separate HUD to change the colour of the mask. Super cool. I raised the mask (because it is editable) to my forehead, but it comes set up to wear it on your face.