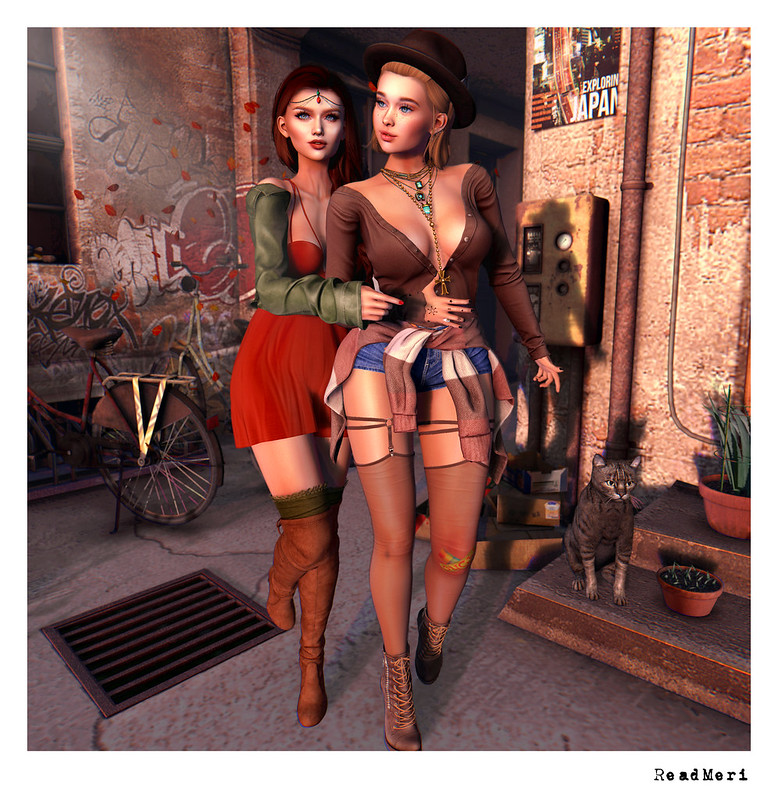 They say, don’t they, that it’s not what you know, it’s who you know? Well, I’ve seen many collaborations from bloggers on Second Life and I’ve taken part in one or two before myself, but sometimes it’s so much easier and more satisfying because you’re already friends.

I met Sia (aka Sheila Breen) some time ago by commenting on her Flickr and saying I liked her stuff and she could probably teach me a thing or two. She (much to my surprise) said she would share some tips and encouraged me to contact her inworld. Now we’re good buddies and we have a laugh. I like that she instinctively ‘gets me’ even though for her, English is her second (or third – darn, she’s so clever) language.

So, hat’s off to Sia for being a super photographer, blogger and friend ❤ Here’s her picture of the two of us with the credits for her own outfit.

I find connections in Second Life fascinating. How you can meet some people and even through the medium of type, you just KNOW they are your kind of person and sometimes, not only that, they actually are one of your people, but you only just met them.

I’ve met a handful of people in Second Life for whom I’ve had strong feelings of togetherness very quickly, Thom was the first of course. That amazes me. How could I possibly drop onto the head of a man at 6 days old and he be the one who I stay with for 11 years? Just dumb luck, I suppose.

I’ve had some amazing connections with friends too, one of which led to a total career change for me in my first life and a lot of help and kinship, for which I’m forever grateful.

I’ve got friends in some places I’ve never seen, people who have experiences I never could dream of and still I can feel like I’m with them as wholly as someone in the same room.

I’d love to hear about some of the connections you feel with people from Second Life, or if you’re not a part of the SL community, how about people you have met online, through blogging or social media? Tell me everything, I’m feeling squishy.

First off, let’s take a look at Blueberry’s ‘Can’t Relate’ Outfit, which is perfection!

Blueb says… the Mega Pack will be 30% OFF for 1 week only! Don’t miss out on this iconic Blueberry set.

🔥Shoes and Stockings Pack: Stockings come in 5 versions. Opaque, Sheer, Sheer+, Sheer++, Fishnet. They can all be worn tiptoe or flat.

Shoes also come in flat or high heel, soles and metals can be customized.

🔥Shorts on FIRE: The shorts come with optional belts, perfectly match your colors to your boots or cardigans. I added a little “thank you for your patience” bonus to the fat pack. Fire version of all 20 colors can be found in the fat pack or mega pack.

🔥Cardigans: Each purchase comes with worn or waist wrapped cardigans and available in 3 texture modes.

Knit: A classic knit for every day wear.

Cotton: Very sporty casual style. Feels more like a sweater than a cardigan with this version.

Built in tops are available and optional for the cardigans.

🔥Tops alone: Tops alone can be purchased as a mini pack, they are also included in the cardigans fat pack, and of course the mega pack.

Whoa… that’s quite a pack. My advice – go grab some or all of it, each element is unmissable in its own way.

NEXT! Lock&Tuft’s Witcher hair and hat. I think it’s perfect for this time of year. I mean, it’s not a Witches hat per se, but who’s to say what the fashionable witch about town is wearing this year? Well… I am. And they are wearing this. You buy a colour pack and aside from the many choices of hair colour, there’s an additional HUD to change the hat colour. They’re all dark wintery shades including black – obvs!