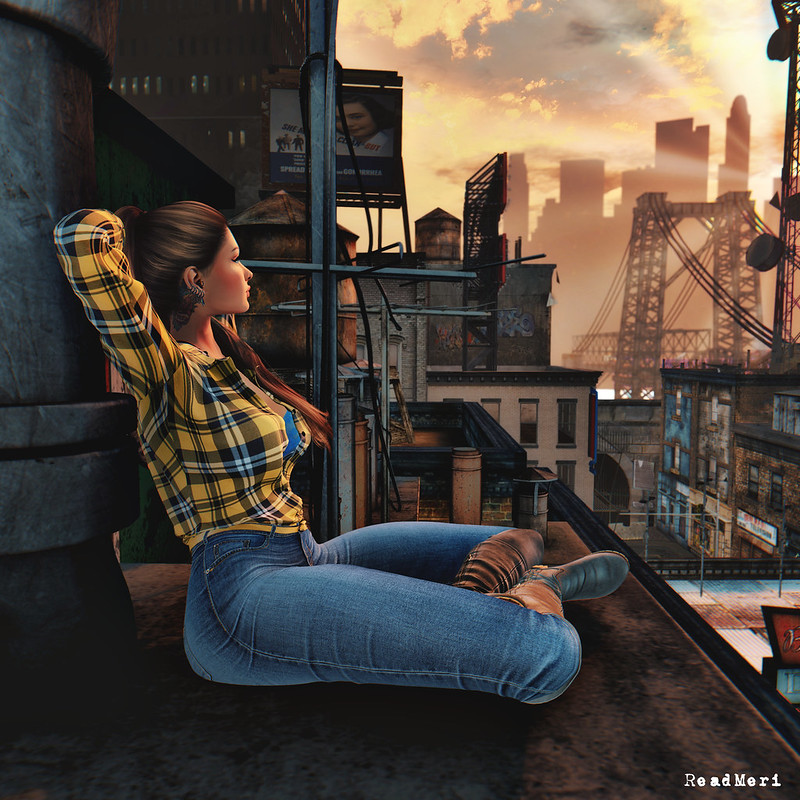 Morning sugarpuffs! Firstly, I want to tell you about a new sim I went to visit in Second Life which has quickly become the current rage amongst photo-takers. Somewhere Else BKLYN is based on the Brooklyn area of NY and is practically littered with people taking photos of themselves.

In addition to the real people standing very still, there are static figures posed as if they are wandering around, crossing roads, walking along pavements etc.

I fled the busy areas and made my way up to the roof so I could look down on all the bustle and feel tranquil.

Ok, so, from an SL photo-taking perspective, there are very many pluses. It looks great, you’re welcome to go there and take pictures (you don’t get that sneaky feeling you sometimes get at RP sims when you only want to take a picture and not become a character), you can double-click teleport. You can’t fly or rez any items, however. Flying is not an issue if you can TP, so that’s fine, but the no-rez thing can be difficult when trying to set up poses etc.

I get it, they don’t want people to spoil the sim by rezzing stupid things (and where freedom reigns, so does the troll come!) but a group with a small fee could avoid that happening and allow those people who want to use the sim regularly to a) contribute a little and b) rez their stuff for a limited time.

ANYHOO! Nobody died and put me in charge – yet.

I recommend you go and have a look, it’s really interesting.

In other (more mundane) news, my decorator is the latest in the line of tradesmen to mess me about. Forgive me, but I don’t understand. It goes like this…

I need a job doing
I look at listings and reviews, I choose a couple of companies
I call them and ask them for quotes
Some of them come and look at the job and provide a quote
I choose one from the quotes
I call a man and ask when they can come and do the job
They say when they can come
They don’t come.

Anyway, this one hasn’t ‘not come’ yet, but I can’t get a straight answer out of him about when he is coming and he’s not calling back. He’s said previously he’s starting on Monday morning and the day before yesterday I emailed and asked him what time he normally started so I could be here to let him in. No answer.

I called him yesterday and asked my question again, he said that cus the weather has been bad (he works indoors?!?) he’s still on his last job and while it might be Monday, it might be later in the week – would that be a problem?

I said that it would be, because I had to clear everything from the room prior to him coming and then arrange to stay somewhere else for a couple of nights – along with my nosey and annoying cat, and running my own small business.

I pointed out that it wasn’t that it had to be Monday, it could be Wednesday or Thursday he started, but the most important thing was that I needed to know very soon… I needed time to get organised myself.

He said he understood and might have a better idea by later on that day, he said he’d call me at 8 pm to discuss. He didn’t call. I tried him at 9 pm and got his answerphone, of course.

I left him a message asking him to call me back this morning to discuss. Nothing so far and it’s 11.30 am.

It doesn’t feel good, honestly. I was brought up not to chase people if they don’t return your calls. I shouldn’t feel like this. I’m just a person who wants some work done and is willing to pay another person to do the work.

I reckon it’ll take me 2 days to get the room cleared and get temporarily moved out with the cat… how long do you think I should give him to get back to me before I let him know not to bother?

Oh! And to the arse (and moderator – talk about setting a good example) on the Second Life Subreddit who thinks it’s smart to comment that ‘I’m starting to wonder if that blog is written by an AI.’ and then doesn’t respond when I ask why, you can just join the long line of ignoramuses who aren’t replying to me at the moment. And also, food for thought, just because an intelligence far outstrips your own doesn’t mean it has to be artificial 😉

Ok… I think I’m done. Have a great day blog reader, sorry for being such a grump! ❤ 😀

You can enjoy 50% off the cost of Blueberry’s Power Play Fatpack only until Sunday. It’s my favourite release so far this year and we’re 11 months in. It’s truly wonderful and just my kind of thing. You can read all about the details on Blueberry’s Flickr ❤