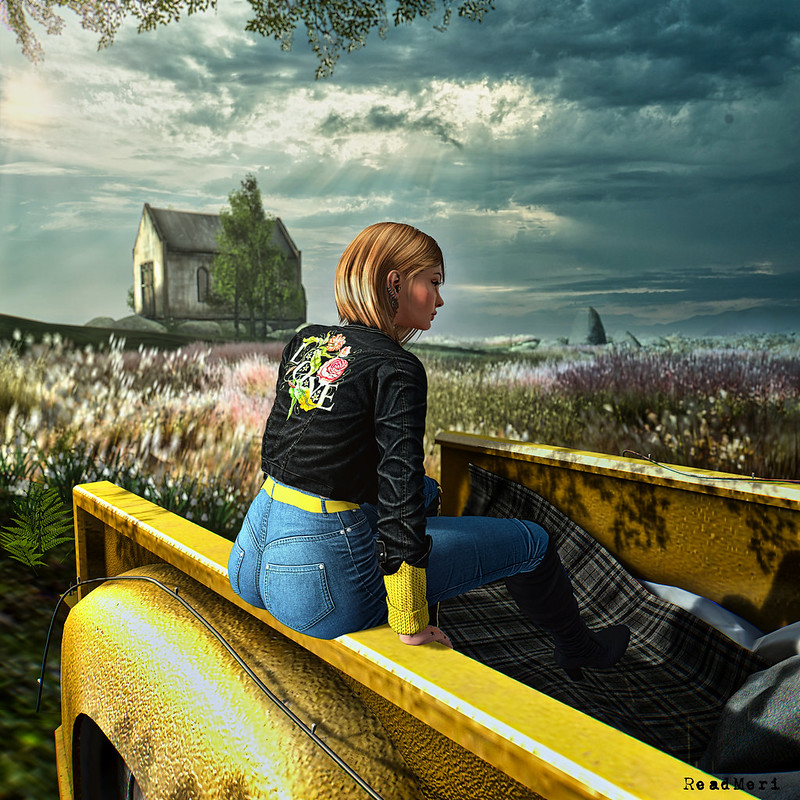 Well, I have a true story to tell and some of it is quite personal, but I’m guessing you’re used to a little oversharing by now.

I was married when I met Thom in SL and, although I loved and cared about my husband, the marriage wasn’t working out the way I had hoped. My husband was quiet (I often go for quiet men) and loved nothing more than being on his computer all the time. And when I say ‘he loved nothing more’ I can only assume that included his feelings for me because on numerous occasions I’d tried to discuss with him the fact that I felt very alone and isolated, but to no avail. I’d moved areas to be with him and once I was there, he was quite happy to not talk and not do things and thought that was fine.

That isn’t to say he didn’t care about me and wasn’t kind. He was a kind person, indeed.

Before I met him, my step-mother had bought me the first five Sue Grafton books, starting with A is for Alibi (and so on). The books were fun and light reading for me. I grew to love the protagonist – private detective Kinsey Millhone – and dreamed about becoming one myself.

In 2008, I told my husband I had feelings for someone else (someone I had never even met in RL) and for this reason, my marriage to him had to be over. It was hard to do and even harder to leave behind my home, most of my possessions, him and our cats. But I did it because I thought it was the right thing to do.

I went to my Mum’s house and cried and talked about my feelings – about my husband and about Thom. Soon after, I met Thom in RL and while things were far from clear-cut or simple, I thought we had something. Either way, I knew that returning to a husband and wife relationship wasn’t right, given that I had developed feelings outside the marriage.

My husband called me and we talked and we agreed it had been horribly hard, but I was honest with him about my feelings for Thom and how I couldn’t just go back to being his wife. He said I didn’t have to and that I could come home as friends, if I would just come home. So I did.

I think this is the point most people become a little confused. You see, I know it’s not normal for separated people to simply decide to be friends and to return to living together while feelings are so raw, but he, my newly-minted ex, was an extraordinary man in that sense.

In a way, I guess, the issues that had caused me to find attention elsewhere were also the conditions under which I could return home. He just wanted my presence in the house and for things to be ‘normal’. So, when I went home, I moved into the spare bedroom and we adjusted to being part of a family, but not a couple. We did good.

We were good friends and had good times. When Christmas came he always bought me my Sue Grafton Alphabet book and the years went by. I would go away for weekends to spend time with Thom and after some time, my ex started up a distance relationship with a woman in the US who was friends with his sister.

The books continued until one day, just over 2 and a half years ago, he told me that he wanted to move to the US and to do so, he had to marry his girlfriend and so we needed to divorce and sell the house. I won’t pretend it was easy, but it was time for it to happen.

So that’s what we did.

I moved into my new home in Feb 2018 and got some bookshelves, I spent time putting my books on the shelves and (obviously) putting the Sue Grafton ones in order. I realised we’d reached ‘Y’ in the alphabet. That seemed inordinately sad, an incomplete set. At the same time, my ex was drawing away from me as a friend because his fiance didn’t like him seeing me at all. It hurt that it was necessary, but I had to come to terms with it – she was his future.

I’d reconciled myself to the fact that I would just have to have an incomplete set, because I couldn’t think about someone else buying me the last book. I decided I’d never read the last in the series or find out what happened to Kinsey, except sometimes… well, you’ll see. Time passed. He left for the US and got married and I began to settle in my house.

A week ago, I thought ‘sod it’ and asked my Mum if she could get me the last book in the series for Christmas. She rang me yesterday to tell me the bad news – Sue Grafton had died just after Christmas 2017 and wasn’t able to write her last book, ‘Z is for Zero’. Her husband said she’d had the title decided for years and years, but was just too ill with cancer to write it.

The series will remain unfinished forever and Kinsey will remain frozen in time, just like my friendship with my kind and unusual ex.

Thank you Sue Grafton for so many hours of enjoyment, I’m so sorry you died.