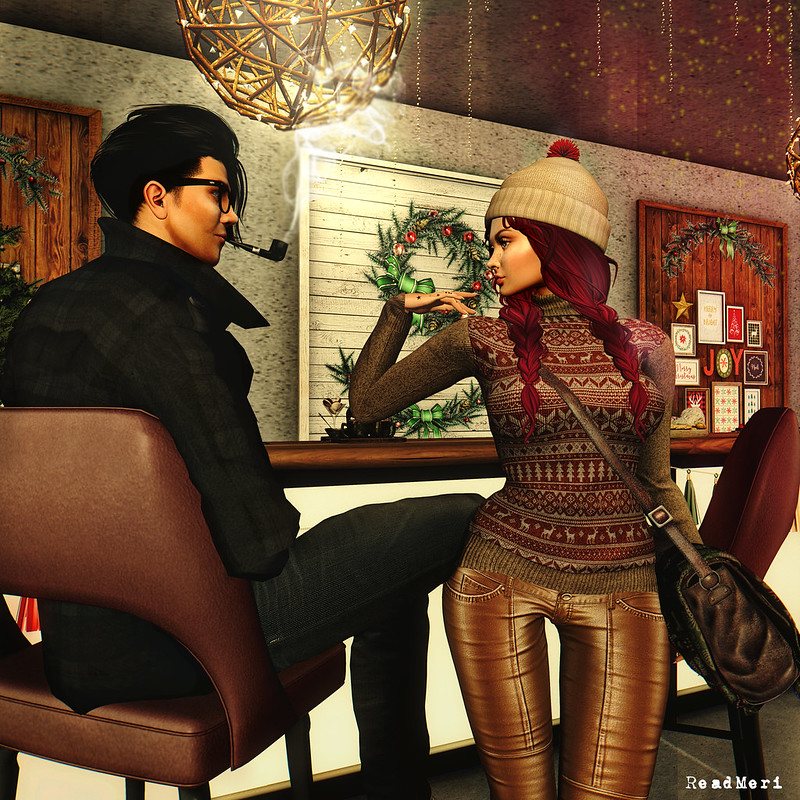 And I know it’s gonna be

Hey blog readers, lunchtime lurkers, picture perusers and all. It’s beginning to look a lot like Christmas eh? My cat is loving it, all the wonderful packaging which is appearing all over the house for her to rummage in and create chaos around.

As you can see, I did that rare thing, a photo with Thom. Well, I say ‘with Thom’ more like I borrowed him for the picture*. My SL wouldn’t be at all if it wasn’t for Thom, I’d probably have packed it in ages ago, but it was where we met and were formed and we’ll always have a connection there.

Part of the reason I don’t ask Thom to be a part of my blog on a regular basis is that he has no interest at all in new SL things. For instance, when mesh ears, hands and feet came out, he was still engaged enough in his avatar to want them and to embrace them. His mesh penis is a sight to behold (aww, men and SL cocks, eh? Bless). He bought some mesh clothes and wears them.

He has the free The Mesh Project men’s body from days of yore for nakedness, swimming shorts and wandering around in undies and has no interest in upgrading to a body fitted for the clothes being released now. As he says, he has clothes, he has a body, where’s the problem?

He’s horrified at the idea of getting a mesh head and simply will not countenance such a move for his own ava. He doesn’t generally like Meri’s mesh headedness either and will occasionally stage protests in a papier-mache ‘Frank’ head (a wonderful film if you haven’t seen it, we loved it).

So while my inventory teeters precariously around the 120k mark, his dwells more around the 12k mark and he has no intentions of paying any attention to his appearance for the forseeable future. Occasionally, when I ask to borrow Thom for a photo, I get him changed and unless it’s into something ridiculous, that’s usually the way he stays until I do it the next time. I’m always careful to save his outfit before changing him so that he can simply change back if he doesn’t like it, or just get changed on a whim one day (fat chance!).

Thom still wears his Akeyo Low Tops most of the time (I think he got those in 2009). I’ve tried pointing out that his render cost is greater than mine, probably because of these older items he wears, but he doesn’t care.

So yeah, the fact is, he won’t change to please me and I won’t stop changing to please him. We have reached an avatar impasse from which we will probably never move. I suspect he thinks I’m shallow in regards to avatar appearance, at least.

But secretly, I don’t care that he won’t change. Sssh, don’t tell him. I love the stubborn mule and I think he’s beautiful. He still makes my heart miss a beat when he logs on, even when his hands don’t quite fit his arms right or my viewer begins to lag because of his retro canvas footwear. He’s my man, end of story.

It’s worth noting that the items Thom is wearing may no longer be available, I haven’t checked, I have simply linked you up with the stores he got them from. I’m sure they have other similar items if not those exact ones.

Aphorism’s lovely Zara sweater is a super new release and I’m in sweater-love with it. It’s a mainstore release and comes in 8 patterned and 8 plain colours, so it’s not just for Christmas-time. They’ve also released a Zak sweater for guys in the same design, only without lady-lumps in the front of course. If you plump for the fatpack, you can have contrasting body, sleeves and neck/waist, as I do in my picture. Lushness!

I can’t find that very same Reverie bag on their marketplace, the owner and designer is no longer in SL on a regular basis and so her mainstore is no more. She has done other bags, however, and they’re all really beautiful. My faves ever.

* It is worth noting that ‘borrowing’ Thom might sound like I simply log him on but that is not allowed under Linden Labs terms of service and can result in the banning of both avatars! It is not advisable therefore, to allow someone to log you on, or to log on someone else’s avatar. Because Thom and I spend time at each other’s homes, we often log on to SL from the other person’s computer and connection and in this way, I am able to ‘borrow Thom’ without him having to sit at the keyboard and assist me during the photo, beyond him logging himself in on the Firestorm viewer.