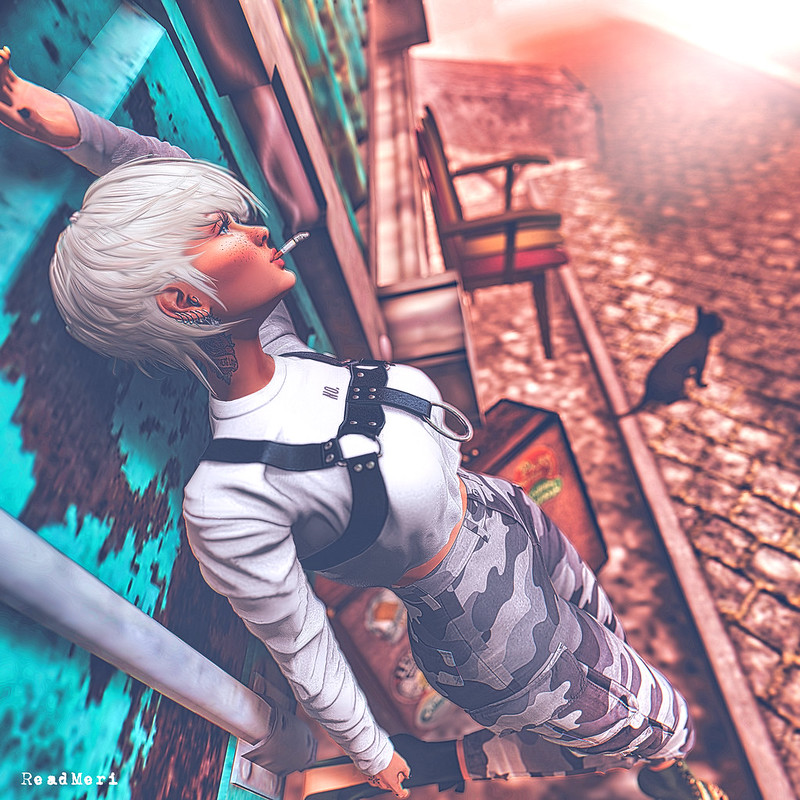 For those of you who don’t know, I’m not coy about my age. I’m in my 40s in my first life and that’s absolutely fine with me – mostly.

When I was a younger woman, I found it hard to disappoint people. I felt like I should make them happy. Like it was my… thing, I suppose. This attitude led to all sorts of unhappiness for me, much of which I simply avoided dealing with.

‘No, no, it’s fine’ was often heard coming from my young and inexperienced lips, but this was not fine at all. Indeed when I started Second Life, almost 12 years ago, I was still something of a ‘Yes woman’ and I ended up over-committing to things, being involved in situations I really didn’t want to be in and feeling overwhelmed.  You know that feeling, I’m sure!

It’s become something of a mantra these days for people ‘Start with YES’ ‘Say YES, you don’t know where you’ll end up’ etc. etc. I see all these positive Facebook memes about saying YES to all of life’s opportunities. But I’m here to tell you, my soul brothers and sisters, that YES is not all its cracked up to be at all. YES can lead to you feeling really very tired and ultimately quite sad.

You see, every time you say YES to someone else, you’re giving them a gift, which is lovely. I love to make people happy and I actually make a conscious effort to do and say things which will make other people happy. I just love to see them smile!

However, saying NO makes me happy. I know right… unpopular view. The ability to say no, without feeling bad about it, is a skill that needs to be learned and honed. We need to train ourselves to say NO without feeling shitty about it. It’s not selfish to say NO, it’s just letting the other person know what pleases us and what doesn’t. What we’re able to give and what we aren’t, what our boundaries and expectations are.

And you know what’s strange? People quite like it. If they like you, love you, care about you, they want to know you have standards and boundaries and those make them feel secure. NO makes people trust you. They find it easier to know who you are.

Imagine being dropped blindfold into a body of water. You can’t see the bottom, the sides, you don’t know if you’re in the middle of a bottomless ocean. You panic, but no need, because you were only in a swimming pool. It was only slightly deeper than you are tall, you can doggy paddle to the sides. You need to know where the boundaries are in order to feel safe. It’s the same with other people.

People worry about making excuses and sometimes end up lying because it’s easier. I’ll give you an fictional example. A friend asks you if you will organise her Hen Night, you love this friend, you say YES. She then says she wants to go to Magaluf and whoop it up and it’s actually a five day thing she wants, and you’re now left with organising a group holiday you don’t want to go on. You feel bad… you’ve already said YES. But if you tell her now that you can’t because your foot hurts or it’s your Aunty’s birthday, she might suss you out.

It’s far kinder to yourself and to your friend to say… ‘I’m not sure, what do you have in mind?’ in answer to her question, rather than say YES and overcommit. Then, when she says what she wants, you should tell her straight and nice. ‘Oh Stacey! (I’m channelling Gavin & Stacey here I think, maybe I’m Nessa today) I really want to support you on the run up to your wedding, but I don’t think I’m the right person for the job. Not my kind of thing, sorry’.

A real life example is that soon after I moved into my current house, a neighbour knocked on the door and said ‘Would you do a me a favour?’ I said ‘What is it?’ and she kinda laughed, she said ‘Oh, you won’t do it unless you know what it is first?’ and I said ‘Yes, that’s right’ and smiled. (Turned out she wanted to put her recycling bin in my yard and have me put it out for her the next week when she was on holiday. I said yes). Now she knows I’m not a pushover, but I am helpful. Ta-da, neighbour relations level one complete.

In blogging for Second Life too, I have learned to say NO and be okay with that. I learned in the first couple of years that I don’t like blogging shoes or nails for sponsors… it can restrict photographs to some odd angles if you have to showcase extremes of your body. Plus… I had a shoe sponsor who did some nice stuff but felt their product should be the centre focus of each picture they were in, and quite honestly, it wasn’t worth it for me. I never post naked just wearing shoes (although I have had some requests).

It’s the same with furniture and decor. I love looking at furniture decor blogger posts, I think it’s a skill to put it all together and make it look good, but it’s a hell of a lot of work for one photo or blog and it takes up all your allowance of prims in order to set the scene. I’m just not in a position to do that and do it well and I’m not deleting my house for anybody!

I don’t even blog many poses for sponsors (you might have noticed). I like to go to places for a picture, see what’s there and perhaps alter what’s provided in a seat, for example. I don’t want to HAVE to go there and point at the sky within a given time, because a blog pack has been issued. That isn’t inspirational or fun, that’s duty, and duty blogging lacks love.

If I sound like a brat, that’s okay with me. This is a fairly recent evolution of me and I’m still finessing it. It’s a constant path of learning and changing, but I’m happier now I can say NO and give what I want to give, with my whole heart.

Getting older has allowed me to the confidence to communicate, to the point where I rarely feel cornered or pressured. I now don’t feel so bad about saying NO, although occasionally, it still catches me unawares and I do feel bad. But not so bad as if I was in Magaluf on a badly organised week’s break with Stacey and 99 of her friends.

Maybe one day I’ll do a blog about the bad things about getting older (my knees for example), or maybe I won’t 😀 Got to let the young ‘uns look forward to something! But less about me, what’s improved for you with age? Do you hate saying no?